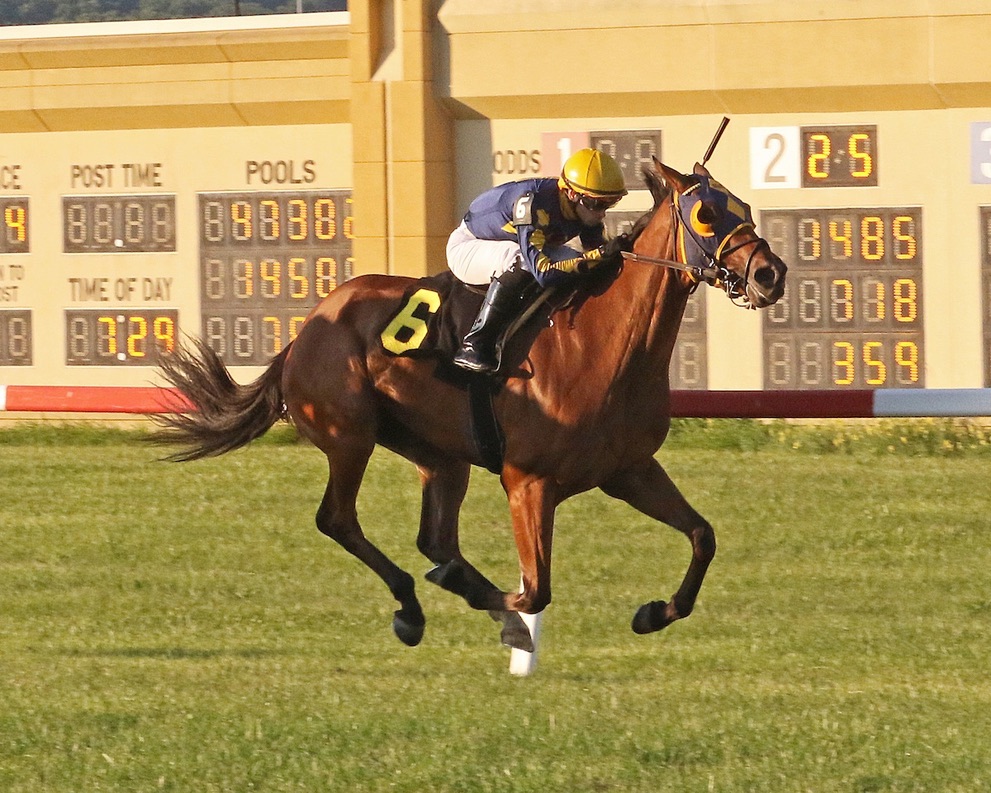 In conjunction with Carl McEntee, Verrazano was chosen for Move with the plan to produce a commercial PaBRED foal to be sold at auction. Verrazano looked like an exciting new stallion prospect off his race record, standing at Coolmore and phenomenal pedigree being 1/2 brother to Graded Stakes Winning, successful stallion El Padrino and the phenomenal Princess of Sylmar, a PaBred who won 4 Grade 1’s including the Kentucky Oaks with career earnings of $2M+. Princess of Sylmar was sold at auction for $3.1M to Shadai Farm in Japan. Verrazano started out 5th on the freshmen sire list producing graded stakes winners like Seek and Destroy, a MGSW on turf. Surprisingly, at least to us, Verrazano’s U.S. stallion career was cut short by his sale to a syndicate in Brazil in 2019. The sale undermined the commerciality of Verrazano offspring causing HnR decision to keep Move 19/aka Lingfield Park to race.

Once it was decided to keep Lingfield Park to race, he was sent to Delaware, and then Virginia, to become certified for their thoroughbred incentive programs. A large horse, it took a while for Lingfield Park to round into racing shape and overcome the usual bout of 2 year old ailments. LP did not make it to the races until March of his 3 year old year. After legging up at Eagle Point Farm with Karen Godsey in Virginia, LP was sent to Fair Hill Training Center in Eklton, MD to be trained by Phil Schoenthal.

Fair Hill is one of the best, if not the best locations, to stable and train thoroughbreds. Trainers have access to dirt, Tapeta, and turf trails for training. Think Newmarket UK with dirt facilities. LP has/had plenty of workmates during this process including our homebred 3 yo colt Nimitz. Nimitz has won 3 of 7 and produced performance numbers right on the edge of black type performance levels. LP worked well with Nimitz so we believed he would do well once he got some experience. We also believed that LP is a two turn horse, but ran him short first time out to get some experience and conditioning.

LP then went to two turns on dirt race 2 and 3, finishing 2nd in race 3. Besides distance and surface considerations, races that take advantage of LP’s PaBred status and VA and DE certifications take priority. In May, what looked to be LP’s perfect next race came up at Penn National, a PaBRED restricted race Maiden Special Weight race at a mile on the dirt. Unfortunately, LP came down with a viral infection and had to be scratched from this race.

Once past the virus, and back in training, and another month lost, LP was in need of his next/4th start. This is where breeding, state certification and luck came together for him. Given LP’s pedigree and training on the All-Weather Tapeta track at Fair Hill, Phil S believed LP would do well on dirt, AW and turf, a rare quality. Second, because LP is a PaBRED, LP can be entered in certain maiden claiming races without putting him in for a “tag”. So our entering LP in a $25K maiden claiming race did not represent any decline in our expectations for LP, rather represented the need for a race. Plus HnR as the breeder and owner of LP, is eligible for significant incentives when he wins or hits the board. As it worked out, this plan came to fruition. The winner’s purse was increased for PaBRED winning an open race, the breeder received a bonus, and LP earned the VA winner’s bonus. As a result, the incentives exceeded the winner’s purse for this particular race. LP should race again after a few weeks break. Given his ability to run on three surfaces, LP is a strong candidate to run at least once this summer at Colonial Downs in VA.