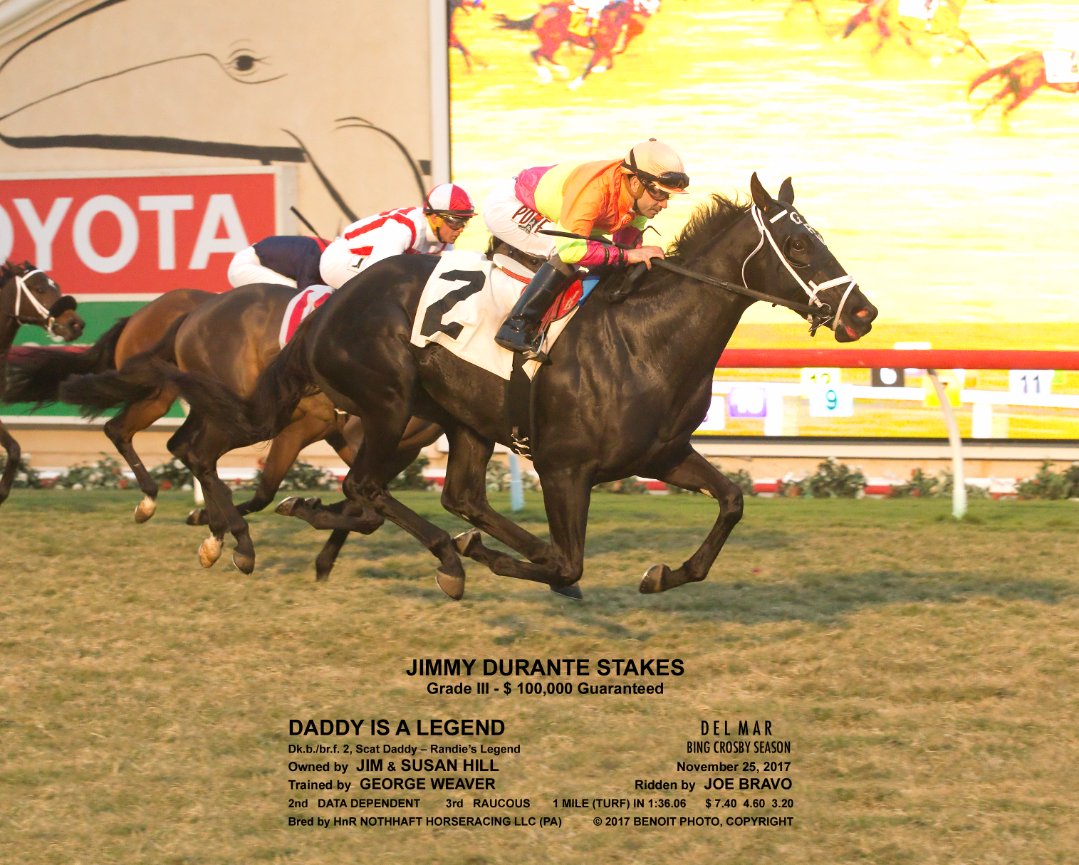 Hank Nothhaft is no stranger to seeing his Pennsylvania-breds succeed in Southern California.

Nothhaft, a native of Pennsylvania  and a resident of California,  is the breeder of 2016 Breeders’ Cup Filly and Mare Sprint-G1 winner Finest City.  Although Finest City couldn’t repeat this year at Del Mar, another filly bred by his HnR Nothhaft Horse Racing achieved graded success where the surf meets the turf in November.

“You talk about a turn of foot, whoa,” Nothhaft said of Daddy Is a Legend’s powerful stretch run to win the Nov. 25 Jimmy Durante Stakes-G 3.

Sent off as the 5-2 favorite in the field of 12 for the 2-year­ old stakes at 1 mile on turf, the daughter of the late Scat Daddy made a swooping run while wide of her competition around the turn and through the stretch to win by a length for trainer George Weaver and owners Jim and Susan Hill.

” Day 1, she had a big, beautiful head on her, big body,” Nothhaft said. “Looked like maybe she was going to turn into something interesting as a physical specimen. She did mature rap­idly, she turned into a beautiful weanling.”

Therefore, Nothhaft made the decision to enter her in the 2015 Keeneland   November breeding stock sale.   Consigned by Darby Dan Farm, the bay filly left the ring after a final bid of $140,000 from Cavalier Bloodstock.

“I was ecstatic to sell her for $140,000 at that stage of my career. She was bought by Cavalier, who oddly enough bought a weanling from me in the latest sale in Keeneland, so I thought that was pretty ironic; ‘ Nothhaft said. “I was glad that they pin-hooked her, they didn’t make a lot of money, but they got her into really good hands of some serious horse people who have a real commitment to the business.”

Nothhaft was speaking of the Hills, who purchased Daddy Is a Legend for $160,000 at the 2016 Keeneland September yearling sale.

Nothhaft purchased the dam of Daddy Is a Legend, the Benchmark mare Randie’s Legend, for $43,000 at the 2008 Barretts October yearling sale in his first year of horse ownership.

“I took her out of training when she was a 3-year-old,”Nothhaft said of the un-raced mare. “By now I had gotten involved with Smarty Jones in Pennsylvania,  I bought a share. I shipped her across the country to breed to him. During this time, her pedigree improved dramatically.  The next year I bred her to Silver Train, she didn’t take so she was barren. As I learned more about the business, I thought, ‘I really believe in this mare, I want to give her a chance to be commercial. I’ve got to start breeding her to some commercial sires.’ I bred her to Stormy Atlantic, Scat Daddy, City Zip, and now she’s in foal to Tiznow.  Owning the mare, I couldn’t be more excited.”

The recently turned yearling colt out of Randie’ Legend is by City Zip, the sire of Finest City and already named Belleau Wood.

“Tm going to race him, primarily on the East Coast, he’s a Pennsylvania-bred, he’s sitting in Virginia right now becoming Virginia-certified, and I’m going to move him to Delaware and he’s going to be Delaware-certified and we’re going to run every­ body in the Mid-Atlantic off their feet,” Nothhaft said with a laugh.

Nothhaft has been breeding quality Pennsylvania-breds for a few years now, and after recent developments, he plans to continue.  ” I’m back there again,” he said of Pennsylvania and specifically Northview PA in Peach Bottom where Daddy Is a Legend was foaled and Randie’s Legend will again foal out in 2018. “They did the trust fund on the breeding program for Pennsylvania, I had one mare there when that happened, and now I have six.”

As for future breeding plans for Randie’s Legend, Nothhaft isn’t cutting any corners.  “I plan to keep her,” he said. “I booked her to Candy Ride (Arg).”