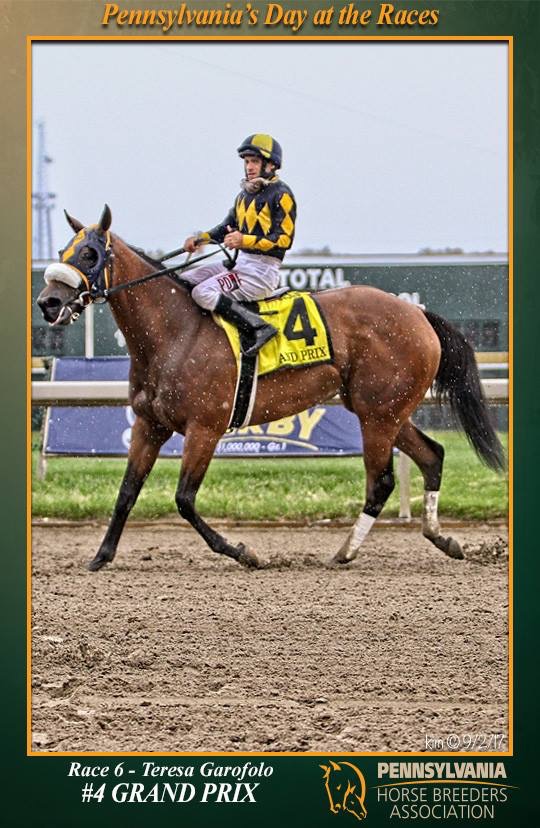 Hank Nothhaft tried to sell Grand Prix not once, but twice.

It seems serendipitous that after failing to meet her reserves in the auction ring, Grand Prix stayed home and has since become a dual stakes winner for Nothhaft, who is more than happy to have her. “She’s a super dependable filly that is right up there in my heart,” he said. “I’m so lucky to have a horse like that.”

The tale of how Grand Prix went from an auction buy back to one of the most valuable mares in Pennsylvania runs through Nothhaft, his bloodstock advisor Carl McEntee, and a champion named Finest City. Nothhaft and McEntee were on a mission to build a solid broodmare band when they came across the Lemon Drop Kid mare Be Envied.

“When we purchased the mare we were buying several mares to support the newly acquired stallion Silver Train,” McEntee said. Nothhaft stood Silver Train until his untimely death in 2013. “We had established a budget of $30,000-$50,000 per mare, as to pay more would be unwise given the potential return.”

One mare that stood out was Be Envied. The multiple stakes placed mare, a half-sister to Grade 1-winner Burning Roma, was in foal to consistent sire City Zip. Nothhaft only had to go to $37,000 to acquire her, with the resulting foal selling for $50,000 as a weanling. That weanling would one day be known as Finest City, the Eclipse Award Champion Female Sprinter and Pennsylvania Horse of the Year of 2016.

With Finest City not reaching her best stride until she turned four, Be Envied was resold. Nothhaft kept two more of her daughters: Move, by Silver Train, and the other being Grand Prix.

Tale of the Cat was chosen as Grand Prix’s sire, a mating based on physical appearance. “The cross was very good and the body types worked together,” McEntee said. “It’s not all paper as you must choose physicals also.”

“We wanted to pump some speed into the foal,” Nothhaft add- ed. “We got a tremendous-looking, athletic foal, and decided she was commercial. I sent her through the ring at Keeneland November as a weanling, but I wasn’t going to sell her for less than I thought she was worth. Her bidding stopped at $62,000 and my reserve was slightly higher than that. I have enough flexibility in my business that I can stick to my principles and be stubborn when I want.”

Stubborn enough that when Grand Prix went back through the ring as a yearling with a reserve of $150,000 and only brought a bid of $145,000, Nothhaft decided to keep her. “In some ways I was disappointed, but in other ways I had mixed emotions about selling her in the first place,” Nothhaft said. “I immediately took her off the grounds and back to Darby Dan. Some people came by trying to make a deal, but I named her a day or two later with a fantastic name and was emotionally committed.”

Nothhaft immediately set about following through with big plans for Grand Prix. The bay filly went to Webb Carroll’s training center in South Carolina, then went off to the barn of Gary Mandella, who trained Nothhaft’s standout mare Living The Life (Ire). “Gary is not known for bringing massive numbers of two year olds to the track,” Nothhaft said. “He takes his time getting them prepared.”

Under the banner of HnR Nothhaft Horse Racing, Grand Prix debuted at Santa Anita with a third place finish June 9, 2016. That Mandella thought highly enough of her to debut her so quickly sig- naled to Nothhaft that Grand Prix was precocious and talented, but it took the filly four tries to break her maiden. That win came at Golden Gate Fields in November, demolishing her rivals by five lengths. She was second in the Golden Gate Debutante Stakes to round out her juvenile season.

At 3, Grand Prix ran consistently in allowance company, but it wasn’t until she shipped from California to Pennsylvania that she broke through in a big way. “We had great confidence in the horse and trainer, and Finest City had emerged as a phenomenal horse at this point. In the back of our minds, we always remembered that she’s a Pennsylvania-bred.”

Grand Prix had been training in Pennsylvania for less than two weeks when she won the fittingly named New Start Stakes at Penn National over the well regarded juvenile state champion Rose Tree. “I was confident enough that I flew out for the race,” said Nothhaft, who regularly resides in Saratoga, Calif. “She didn’t disappoint anybody that day.”

From there, Nothhaft tried to “pick races that made sense for her and maximize the potential of the Pennsylvania-bred program.” Grand Prix was second in an allowance, then won at the same level a month later, scoring by a neck. She added the Dr. Teresa Garofalo Memorial Stakes at Parx in September, and has since wrapped up her season and will get a break before returning in 2018. She has earned $211,762 with four wins, four seconds, and three thirds in 14 starts.

Nothhaft didn’t throw out the option of sprinting down the hillside turf course at Santa Anita next year, but his ultimate goal would be the Presque Isle Downs Masters Stakes-G2 in September, a race he won in 2014 and 2015 with Living the Life.

“I would love to win that race with a Pennsylvania-bred,” he said. “It would be sweet for everyone involved in Pennsylvania.”

Nothhaft’s classy broodmare band, which includes stakes winners such as Kindle and Living the Life, both in foal to Pioneer of the Nile, is where Grand Prix is headed when her racing days are done.

“My goal is to have five to 10 broodmares, all ultimately coming out of my racing program. I’m running all homebreds now. For a guy that got in late and had to buy everything, in a few short years I’ve moved to vertically integrating and running my own horses.”

McEntee had nothing but praise for the owner. “Hank is honestly one of the kindest and respectable men I know. He is my friend, mentor at times and truly someone very dear to my heart. Together we have propelled each other and I shall be eternally grateful.”

After weighing the pros and cons of continuing her race career, HnR decided that the potential economic benefits did not out weigh the opportunity to retire her completely sound, thus giving her the best possible chance for a successful career. Lady Lynne is a full sibling to our promising 3 yo colt, Nimitz @PABred who has won 3 times in 7 starts....hnrhorseracing.com/lady-lynne-starts-2nd-career-in-north-carolina/ ... See MoreSee Less

After weighing the pros and cons of continuing her race career, HnR decided that the potential economic benefits did not out weigh the opportunity to retire her completely sound, thus giving her the b...
View on Facebook
· Share