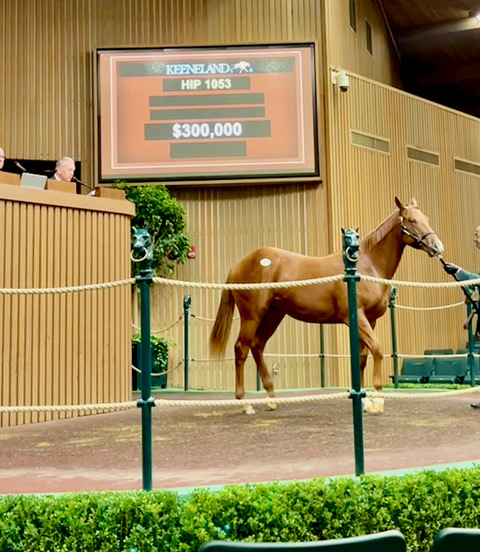 Hank Nothhaft’s HnR Nothhaft Horseracing offered two homebred yearlings for sale, Kindle 21 a colt by American Pharoah as Hip 1053 and Laseen 21, a filly by Justify as Hip 1061 via Consignor Ballysax Bloodstock. Both horses were foaled, raised and prepped at Coolmore America. Though there are a myriad of risks involved with thoroughbred horse breeding, one of the most significant is sire selection. Trying to predict who is going to be “hot” a couple years out is a matter of science, luck and timing.

Fortunately. we did reasonably well with our sire selections for this sale. Clearly there are some stallions in stronger demand, but with commensurately higher stud fees such as Into Mischief, Quality Road, and the amazing run being put in by Gunrunner. Demand for American Pharoah, no longer the new kid on the block, has flourished and is strong, with American Pharoah standing 12th place on the General Sires’ List. Justify, our other choice is off to a very strong start as a Freshmen Sire, leading in stakes horses and graded stakes winners. This puts Justify in the very hot, if not red hot category.

Given that background, Kindle 21 sold for $300,000 which is the 8th highest price among the 72 American Pharoahs offered at the sale. The purchaser of Kindle 21 is Myracehorse.com, wildly successful, pioneer of micro share thoroughbred ownership.

This was the 3rd Kindle colt sold by HnR at auction. HnR sold Kindle 17 by American Pharoah as a weanling in November, 2017 for $400K and Kindle 18 by Pioneer of the Nile for $510K as a weanling added to Kindle 21’s proceeds, Kindle has produced $1,100,000 in sales from three foals. HnR campaigned Made in America (KY) Kindle 16 colt by Tiznow, a stakes winner and currently has Kindle (KY) 20 in training aka American Symphony colt by Into Mischief.

Interest in Laseen 21 was significant, given her strong pedigree, graded stakes dam and athletic, physical make-up. Laseen was 13th highest price of the 82 Justifys offered at the sale.