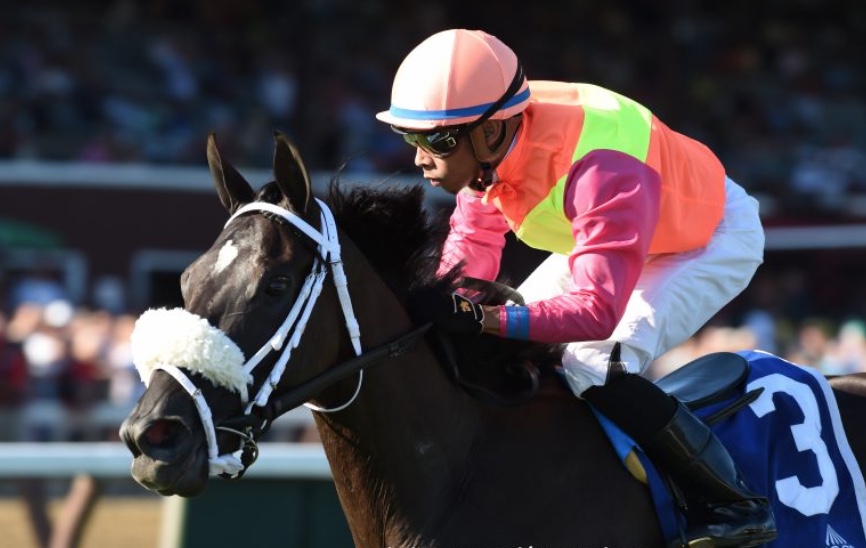 “Missing a grade 1 stakes because your horse comes down with a bellyache can leave a bitter taste.

For the connections of Daddy Is a Legend, the remedy was uncorked on a gorgeous July 20 opening day at Saratoga Race Course when the daughter of Scat Daddy took charge in the stretch and powered to a two-length victory in the $150,000 Lake George Stakes (G3T) for 3-year-old fillies.

“We wanted to run in the Belmont Oaks (Invitational, G1T, July 7), but she got a little bellyache coming up to it, and it wasn’t going to happen. This was the logical next spot to try,” trainer George Weaver said. “She looked great on paper going into the race, and I felt good about the way she was training. She got a good trip, and it worked out for us.”

The 1 1/16-mile stakes marked the first win for Jim and Susan Hill’s Daddy Is a Legend since a one-length victory in the Nov. 25 Jimmy Durante Stakes (G3T) at Del Mar in her 2-year-old finale.

The 8-5 favorite was winless in her three previous starts at 3 but faced some of the toughest runners in her division. She finished behind Breeders’ Cup Juvenile Fillies Turf (G1T) winner Rushing Fall twice while taking fourth in the Appalachian Stakes Presented by Japan Racing Association (G2T) and the third in the Edgewood Stakes presented by Forcht Bank (G3T), and she was a wide fourth in the Wonder Again Stakes (G3T), the steppingstone prep for the Belmont Oaks.

Given the level of competition, Weaver was undaunted by that zero in her 2018 win column.

“She has run well in every start this year. It’s a very, very tough division,” he said. “This was the easiest race she’s been in this year. She’s hooked Rushing Fall. The fillies that ran in the Wonder Again were all good fillies. It’s a really deep division, and she’s one of the better ones in it. We’re hoping she can move forward and do well the rest of the year.”

For owner Susan Hill, the Lake George provided the kind of race she had been expecting to see since Daddy Is a Legend’s stakes win at Del Mar.”We had been waiting for something like this,” she said. “We were very disappointed in the last race.”

The Hills purchased Daddy Is a Legend for $160,000 at the 2016 Keeneland September Yearling Sale for some rather simple reasons.

“She looked like a racehorse,” Susan Hill said about the Pennsylvania-bred filly out of the Benchmark mare Randie’s Legend, “and we loved the breeding. How could you not?”

Bred by HnR Nothhaft Horseracing, Daddy Is a Legend posted her third win in eight starts and improved her earnings to $229,410. Weaver said a stakes later in the Saratoga meet—most likely the $300,000 Lake Placid Stakes (G2T) Aug. 18—would be next for her.

In a race lacking an obvious frontrunner, Punked took charge with a length lead after a half-mile in :47.71 before fading to last in the field of seven as Goodthingstaketime took a brief lead turning for home.

Daddy Is a Legend and 4-1 third choice Altea rallied from the rear, with Altea taking a wide trip while jockey Manny Franco followed an inside path with the eventual winner.

The main thing is that George told me to wait,” said Franco, who was fifth after the opening half-mile. “He didn’t want me to move too early, so I was trying to follow somebody that was going to keep going, and that’s what I did. I waited as long as I could and the inside opened, so I just sent my filly and she was there for me.”

The two drew clear together in midstretch, but Daddy Is a Legend proved best in the final furlong, crossing the finish line in 1:40.42 on firm turf.